Congratulations, GRETA! Together, WE DID IT!  The Guide had previously named her OUR "Person of the Year" and encouraged our readers to vote in TIME's poll and to sign a petition. We did that because we fully believed she was deserving, though we admit we made a big deal about it because we really did not expect that TIME would come through. So congratulations to TIME magazine as well, for having the courage and character to defy powerful interests.

When the news arrived this morning, our editor said, "We stand a chance. It's been in doubt for a long time. But this proves that it is NOT a monolithic power structure. We stand a chance."

Greta is the youngest person ever named as TIME's choice for the one person who is making the biggest difference in the world. Before 2019, the previous individual to hold the record for the magazine's youngest Person of the Year was the first one in TIME’s history: 25-year-old Charles Lindbergh, selected as most influential man of 1927, following his first-ever solo flight across the Atlantic. 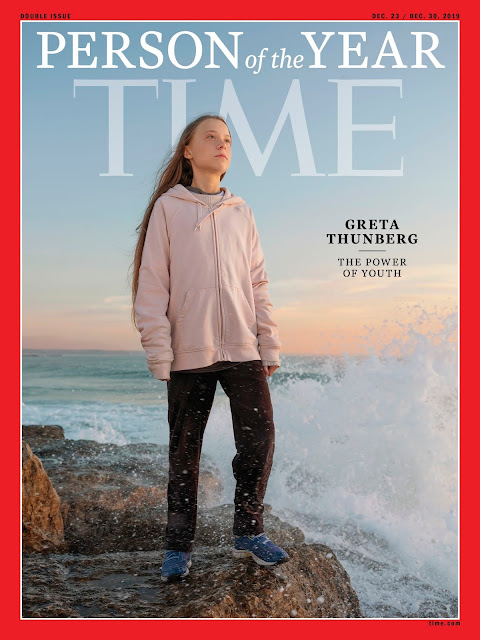 Here's the story in TIME magazine, with their video: https://time.com/person-of-the-year-2019-greta-thunberg/

Read reports ABOUT the TIME announcement at:

Here are reprints of OUR most recent advocacy for Greta and her cause -- the cause that must be EVERYONE's cause..
___

Our Nov 29 Special edition, "Turning 'Black Friday' & 'Cyber Monday' GREEN,"  is filled with facts and how to become an activist once you are armed with them. The # 4 feature story reads:

The essential Greta: "and a little child shall lead them."

Here at the Guide, we believe there is no question that TIME MAGAZINE'S "PERSON OF THE YEAR" must be GRETA THUNBERG.

Whether or not that publication can overcome corporate pressure, we aren't waiting to see. The Guide is hereby naming her OUR "Person of the Year."

Greta Thunberg's solitary school strikes for climate awareness, outside the Swedish Parliament every Friday, became the first domino. Her passion and determination overcame her own challenges -- autism and asperger's -- as she drew others to the compelling reality that caused her to take action. She is still unjustly being subjected to ridicule, even though her movement has recruited tens of millions. Greta continues to stand up for scientific truth and to live in accordance with her values, which, unlike those of her critics, are based on frequent dialog with many of the world's leading climate scientists. A diminutive young woman of just 16 years of age, she effectively uses her legal standing as a child to speak for children who want a future on an Earth that isn't drying-up and blowing away. In doing so, she has gained the endorsement of millions of school children and millions more of all ages.

At the moment, Greta has hitched a ride aboard a wind-powered vessel back across the Atlantic Ocean to Europe, to attend the latest major global climate conference. Following her powerful address to the United Nations in New York, she will speak at COP25, which was unexpectedly relocated to Madrid.

Greta is sailing aboard the boat "La Vagabonde" with an Australian family and an expert British skipper. This is not a favorable time of the year for a sailboat crossing of the North Atlantic, so we join in the fervent hope that they all arrive safely. The vessel should reach Lisbon, Portugal early in December.

In our Dec 6 write-up for the second-half of the "4th global climate change protest / extinction rebellion strike" (in the latest December events edition) we wrote:

Life on our planet is at the most critical crossroads since anyone considered a massive nuclear strike. Too many of our fellow humans are infatuated with transitory BS -- with pop culture and celebrities and expensive addiction to whatever is momentarily fashionable, and to buying into it before it goes out of vogue. Meanwhile the planet is hotter than it has ever been since human cultures arose, as evidenced by ancient, 40,000-year-old, ice layers that allow us to make such determinations.

Every major study, including the latest (huge) one released just days ago by the UN, tells us we are nearly past a tipping point of no return with the fatal imbalance of greenhouse gases produced by human activity. Yet, politicians in every nation are dependent upon the biggest economic interests for their re-election campaign cash, and industrialists notoriously finance climate change denial.

Will the Earth's cultures, civilizations, and populations awaken in time? Often little things are the best indicators, especially when they function as "tastemakers." One thing that will be very telling is the announcement of the TIME magazine "Person of the Year." It comes out next week, on Dec 11.

Sixteen-year-old Swedish climate activism icon GRETA THUNBERG is one of the nominees, and we announced over a week ago, she is clearly our choice.

If TIME magazine picks Trump or some kingpin capitalist bastard, that will scream to us pretty much all we need to know about taste-making in America.

We must acknowledge that TIME's pick isn't always a humanitarian or champion of betterment. It can be far from it, going back to when they named Adolph Hitler as "Man of the Year" in the 1930s.

But the point in picking the person is supposed to be choosing someone who has had (or is having) the most enduring impact on the world.

Thus, we say that must be GRETA THUNBERG, because she is the first (and so far the only) one to mobilize millions of people -- people of every age, on every continent, including Antarctica -- to demand immediate and effective action to redirect and mobilize resources to address and reverse climate change.

And let's be absolutely clear, whether or not anyone accuses us of sensationalism:

Whatever sociopolitical or economic or cultural causes or issues anyone is passionate about? Unless we REVERSE climate change, everything else is simply re-arranging deck chairs on the Titanic.

The Guide will continue to bring you news of music and the arts, and news of events AND PEOPLE who inspire artists and our world.

THIS is a SPECIAL EDITION. The most current EVENTS EDITION, frequently updated (with more events added all the time) is at this link, and still has all our latest listings (until it is eventually replaced by a newer events edition).