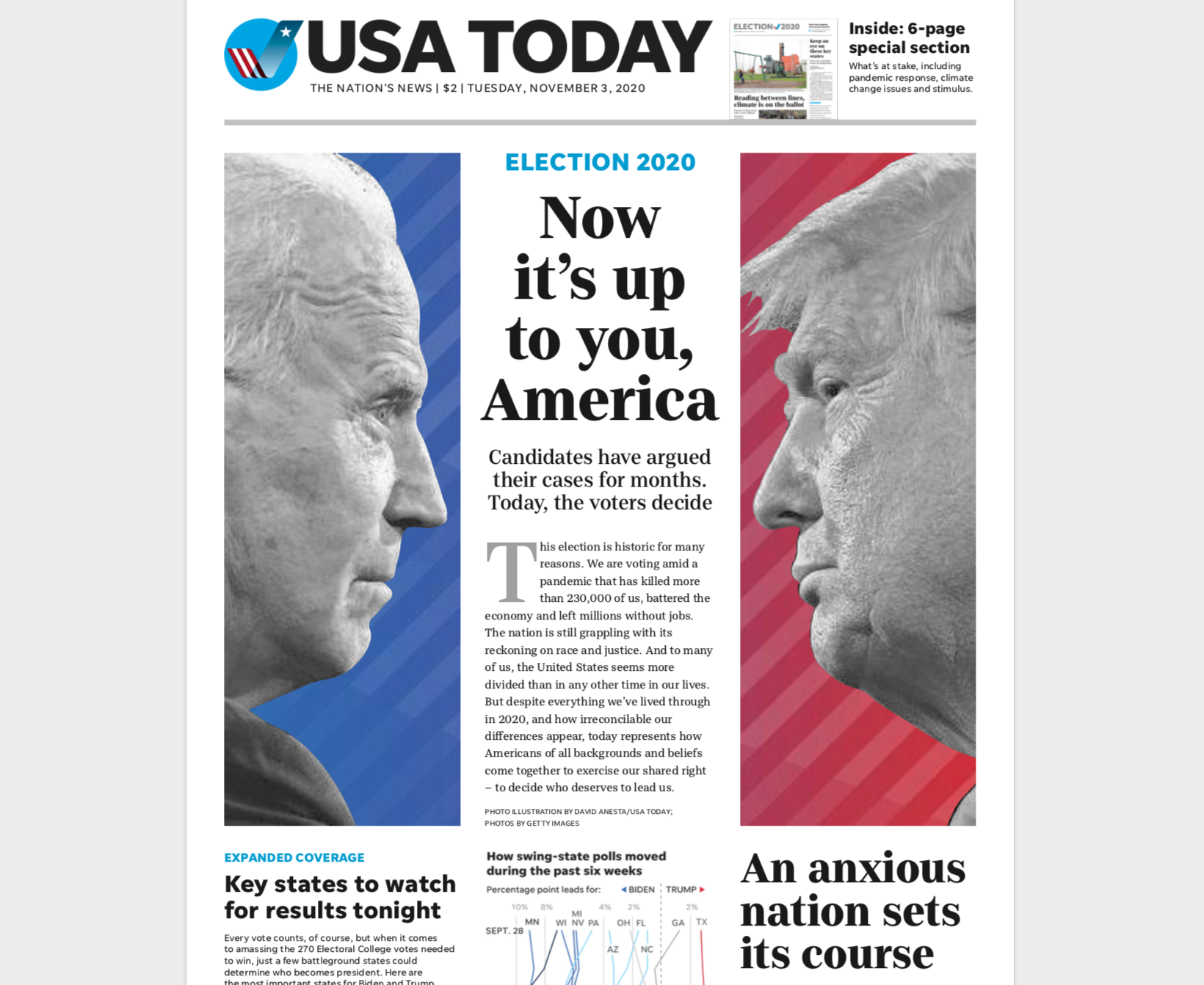 "There is no such thing as not voting: you either vote by voting, or you vote by staying home and tacitly doubling the value of some diehard's vote."

The strange history of Americans voting for President

It's not what you think. And that isn't because of the Electoral College

The following, by Garrison Keillor, is from today's edition of his "Writer's Almanac."

Today is Election Day. Millions of people across the country will be going to the polls today to elect new legislators, judges, sheriffs, school board members, and of course, the president. This year in particular, millions of others will have voted by mail already or dropped off their mail-in ballots.

The first federal election under the U.S. Constitution was held in 1788, and it had the lowest turnout in the history of American elections. Only 11 percent of eligible voters voted. To be eligible to vote at the time, you had to be a white male property owner. But different states had trouble defining what a property owner was.

In order to vote in that first election, voters had to travel many miles to the nearest polling place, which was often a tavern. There they met the candidates for their district's seat on the state assembly. In many precincts, there were no ballots. Voters announced their votes to the sheriff in loud, clear voices, and then stood by the candidate they had voted for, who usually offered them something to drink.

For the first 50 years of American elections, only 15 percent of the adult population was eligible to vote. Thomas Dorr was one of the first politicians to argue that poor people should be given voting rights. As a member of the Rhode Island legislature, Dorr argued that all white adult men should have the vote, regardless of their wealth. He incited a riot to protest the governor's election of 1842 and went to prison for treason, but most states began to let poor white men vote soon after. Women won the right to vote in 1920, and many African-Americans were prevented from voting throughout the South until the passage of the Voting Rights Act in 1965. Widespread voter suppression still happens today, sometimes against specific groups or with specific political motivation.

John Quincy Adams said: "Always vote for principle, though you may vote alone, and you may cherish the sweetest reflection that your vote is never lost."

Rosa Luxemburg said: "Without general elections, without unrestrained freedom of the press and assembly, without a free struggle of opinion, life dies out in every public institution." (books by this author)

Mark Twain said: "If there is any valuable difference between a monarchist and an American, it lies in the theory that the American can decide for himself what is patriotic and what isn't. I claim that difference. I am the only person in the 60 millions that is privileged to dictate my patriotism." (books by this author) 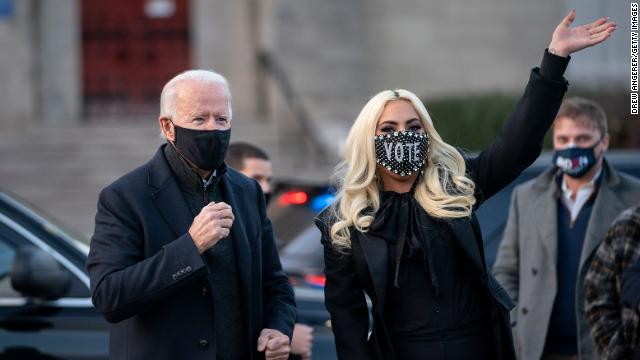 Lady Gaga and John Legend hit the campaign trail for team Biden on Monday, helping the former VP rally voters and turn out the vote. Gaga unloaded on Trump after days of being attacked by his campaign and supporters over fracking. "After days of Trump’s illogical attacks on Lady Gaga (fracking?), the star dropped the mic at Biden’s final rally, calling out his sexual-assault accusations in a powerful speech," The Daily Beast's Kevin Fallon wrote. Meanwhile, Legend campaigned with Harris, calling out "former favorite rappers" who have been "taken in by these lies" of Trump, joking in that they've "even formed a super group" called "the Sunken Place."

Item immediately above, along with what's below before the cartoons, are from today's edition of Brian Stelter's "Reliable Sources" newsletter.

Brian Stelter writes: "Right now trust is in short supply but in high demand. America needs a trust injection. On Sunday's 'Reliable,' I quoted this point made by Edward Luce, columnist and U.S. national editor for the Financial Times: 'Fear is the glue of autocracy, and trust is the lubricant of democracy. Without trust, you're in trouble. And that's the principal feeling I have from this election. This has been conducted with very little trust and, at least on one side, no good faith whatsoever.' One of the pivotal questions this week: Will Americans trust the outcome?"

"The news in this election can't just be about the votes; it has to be about the state the country is in," Bill Carter writes in this new piece for CNN Business Perspectives. "The media has been telling that story for years now, piling up the facts, denouncing the dishonesty, exposing the hypocrisy, countering the B.S. — the dangerous B.S. They have never had a more important job to do than the one they will do on Tuesday — and they probably never will."

The anchors, re: the marathon

>> Chuck Todd, on preparing: "I play two songs frequently to get me in the mood, usually alternating. The first song is 'One Day More' from Les Misérables, the lyrics evoke many themes you hear a lot these days. After that high-minded way of setting the tone for me, I then blast the Ramones."

>> "Are we a divided nation? You bet we are," Lester Holt said to close "NBC Nightly News" Monday. "Angst, uncertainty and fear will do that. Rarely has an election ever been so personal for so many or the stakes so consequential. And now after all the passion and anger, the quiet power of voting will speak to and for our future..." (NBC)

>> "I'm excited," Dan Rather tweeted. "18 presidential election nights 'On Air.' (72 years. Maybe a record?) From a small radio station in rural Huntsville to here with all of you. The mind turns. Will this be my last? I hope not, but know it could be. It will be memorable. Thank you all for joining me..." (Twitter)

>> "I love my country. I know you watching this do, too. And I’m rooting for it,” Chris Hayes said to sign off his MSNBC show Monday night... (Twitter)

>> Max Boot argues that the "real profiteers" of the Trump-era are the right-wing media figures and politicians "who swallowed their doubts about Trump and sang his praise in public because this was the way to higher ratings, page views or poll numbers..." (WaPo)

Fox News propagandists are in overdrive attacking Biden and airing what really amounts to pro-Trump infomercials in prime time. From Tucker Carlson airing lengthy video of Trump dancing while at rallies Monday night, to Sean Hannity portraying Trump as having a strong chance of winning the election. It's all basically a political ad aimed at getting out the vote for Trump...

>> Related story from Matt Gertz: "Fox News’ propagandists are making it sound like the president is the odds-on favorite, priming their audience to attribute any defeat to Democratic fraud..."

>> It is also worth noting: Only one candidate in this race has the benefit of a cable channel and propaganda operation aimed at boosting him and attacking political opponents...

The ones in First Class survived when the Pandemic went down, too...

_
Which one of them -- Jared or Donnie Jr? -- was it said, "Blacks need to want to help themselves as much as Trump helps them"

___
Copyright (c) 2020 Lawrence Wines and Tied to the Tracks,  with additional preemptive copyrights held by individual sources of material appearing herein.
Contact us through the site or at tiedtothetracks@hotmail.com
___
Posted by - Larry, the editor at Tuesday, November 03, 2020