TONIGHT:
Catch Highlights from This Year's Honors & Awards at 9-10:30 pm Pacific on CMT

Live Streamed on RFD-TV and Bluegrass Life on December 7th

We'll start with what's on Friday, December 7th, as the nation observes "Pearl Harbor Remembrance Day,"  The 615 Hideaway studio will be filled with top bluegrass chart artists. They'll be there to help you get ready for a tuneful and fun filled holiday season with a special Christmas show.

Eddie Sanders, Chris Roberts, Larry Stephenson, Glen Duncan, Dennis Crouch & Cody Kilby will perform Holiday classics and new Christmas songs that are sure to be an enjoyable musical experience -- and one that will warm the heart and bring joy this Holiday season.  The Christmas show at The 615 Hideaway will contain many songs from the newly released Christmas album “A Very Merry Bluegrass Christmas” on Engelhardt Music Group / Rural Rhythm Records.

Multi-music-genre live streaming show The 615 Hideaway will post on the RFD-TV and Bluegrass Live Facebook pages, which combined, have accumulated over 600,000 likes.

Here at the Guide, we do all we can to dissuade our readers from infesting their (your) devices and lives with Facebook's shockingly intrusive industrial-espionage-grade spyware. But if you're already afflicted, it is one option to catch the show. Of course for the show's producers, between the artists’ Facebook page and The 615 Hideaways live stream partner, RFD-TV’s Facebook page, that live stream viewership has a potential to reach over three-quarters of a million viewers.

But never fear. Each of the show's live streams is permanently posted on the show's own website, The 615 Hideaway studio, so fans can go back and view the episode at any time, or watch the new episode at their convenience.

About the new album 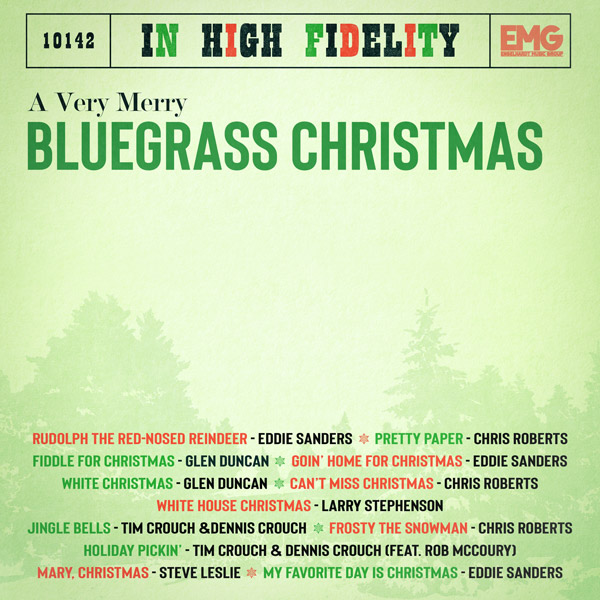 Duncan remarked in a recent interview about the new Christmas album:

“Adam and I invited some of our favorite musicians and singers to record an album at the storied Studio A in Nashville of new and classic Christmas music.  We used the approach of recording a 'Classic Record Album,' like our favorite Holiday Records from the ’50s & ’60s.  So we had all of the musicians recording together ‘live’ in the studio at the same time.

"To take the ‘Classic Recording’ process one step further, we thought of each song as part of an album and recorded many new original and classic Christmas songs.  We wanted this record to be like the great TV network Christmas shows of the 50’s & 60’s that had that classic ‘Variety Show’ format.

"So there’s the widest possible variety of songs: great vocal solos, trios, all sorts of combinations; Instrumentals both fast & slow and material that ranges from Classic songs to songs that have never before been recorded and songs that range from fun Holiday favorites to poignant Christmas songs, to really enjoyable new Christmas Songs.  It’s like a great big Merry Christmas Bluegrass Music Sampler.” - Glen Duncan – Artist, Songwriter, Producer.

Album highlights include Ralph Stanley’s “Holiday Pickin’" performed by Tim Crouch, Dennis Crouch and featuring Rob McCoury.  Other highlights include new Christmas songs performed by Eddie Sanders “My Favorite Day Is Christmas” and Chris Roberts “Can’t Miss Christmas.” Also on the album is “White House Christmas” -- nope, we have NOT heard it -- it was written and performed by Larry Stephenson and "incorporates new lyrics to update this Christmas favorite." (We're not all that sure it 'zactly needed "updating," given the current situation at the White House, so we'll go on.)

A Very Merry Bluegrass Christmas is available now on iTunes, Amazon and where ever Bluegrass music is sold.

Online live Streaming has become a tremendous vehicle to connect music performers with their core fan base in ways never before achieved.  The 615 Hideaway facilitates the elements needed by artists to perform live music online, talk to their fan base, and engage in real-time live chat conversations.  Fans of the artists can request songs during the episode, as well as, and ask questions about the artist’s music and other related topics.

Of course, we are advocates of eschewing Facebook's for-profit snooping on everything you do, so we'll point you directly to the shows own site.

While you're there, you'll find plenty to explore. Like this one from May 3, 2018, with

﻿ Jim & Jesse are celebrating 50 Years as members of the GRAND OLE OPRY, so you'll get plenty of lore and history, along with the music.
There's also the Monroeville – Full Show

Monroeville is headed by GRAMMY® nominated producer and engineer, Matt Munsey, as a Bluegrass / Rock / Country acoustic band of multi-instrumentalists and vocalists.

Morgan Myles is a powerhouse vocalist, and emerging singer-songwriter from Pennsylvania. She's "one of those artists that makes it look and sound so easy."
And finally, grab a chance to catch the video shot this past June 19th,

Eddie Sanders and Don McAfee – A Train Can Run Two Ways
The performance by Eddie features Don McAfee on banjo. Both'll prove to your likin', we b'lieve.

<^>-<^>-<^>-<^>-<^>-<^>-<^>-<^>-<^>
.
♪ The ACOUSTIC AMERICANA MUSIC GUIDE endeavors to bring you NEWS – and views of interest to artists everywhere – more specifically to musicians and the creative community and music makers and fans of acoustic and Folk-Americana music. That includes both traditional and innovative forms. From the deepest roots to today’s acoustic renaissance, that’s our beat. We provide a wealth of resources, including a HUGE catalog of acoustic-friendly venues (now undergoing a major update), and inside info on FESTIVALS and select performances in Southern California in venues from the monumentally large to the intimately small and cozy. We cover workshops, conferences, and other events for artists and folks in the music industry, and all kinds o’ things in the world of acoustic and Americana and accessible classical music. From washtub bass to musical spoons to oboe to viola to banjo to squeezebox, from Djangostyle to new-fangled-old-time string band music, from sweet Cajun fiddle to bluegrass and pre-bluegrass Appalachian mountain music to all the swamp water roots of the blues and the bright lights of where the music is headed now.
.
The Acoustic Americana Music Guide. Thanks for sittin' a spell. The cyber porch'll be here anytime you come in from the cold or back from the road.
.
<^>-<^>-<^>-<^>-<^>-<^>-<^>-<^>-<^>