Marching Forth on March 4th (but without the horn-hatted Q-razies). March 4 2021 edition 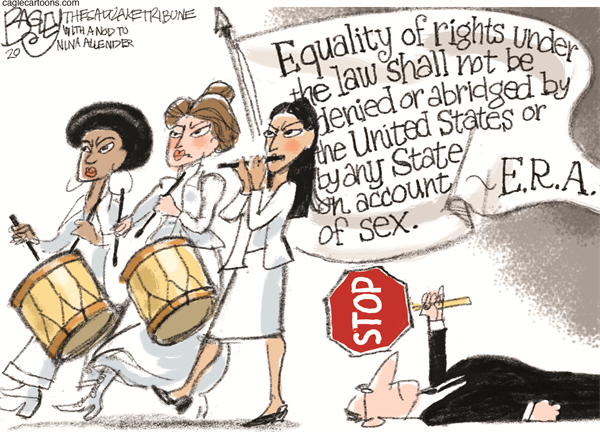 Marching forth for Women's History Month, and more.

Now, hang on. MARCH FORTH is a unique musical group. We are so certain you'll enjoy them that we are bringing you this special edition on, rather appropriately, March Fourth.


We had planned to do this MARCH FORTH special long before the insurrectionista Q-razies threatened to resume their sedition today. Yes, the big ugly fences are still up around the US Capitol (Trump finally got his wall), and National Guard troops are still guarding the place after Insurrection 1.0 on January 6th. We don't know what will happen in DC today, but the House of Representatives is taking the threat seriously, and suspended the day's session to keep lawmakers safely away.

As for what's up here? Well, just after our MARCH FORTH music feature, we offer you a way to "March Fourth with American Promise," where you can do your part to bring sanity to our politics.

We first experienced them and wrote about them in The Guide way back in the double-aughts.

MarchFourth Marching Band now known as MarchFourth! is an American musical and performance group based in Portland, Oregon.They perform mostly instrumental music, combined with a visual performance by stiltwalkers, acrobatics and hooping.

Described as "Like Sergeant Pepper leading a freaky Cirque du Soleil performance from the bandstand or European Gypsy camps stumbling upon rhythms..."

And, "Decked in whimsical costumes and combining the circus big ring with world music sensibilities, [March Forth] has us re-thinking our concept of a marching band." 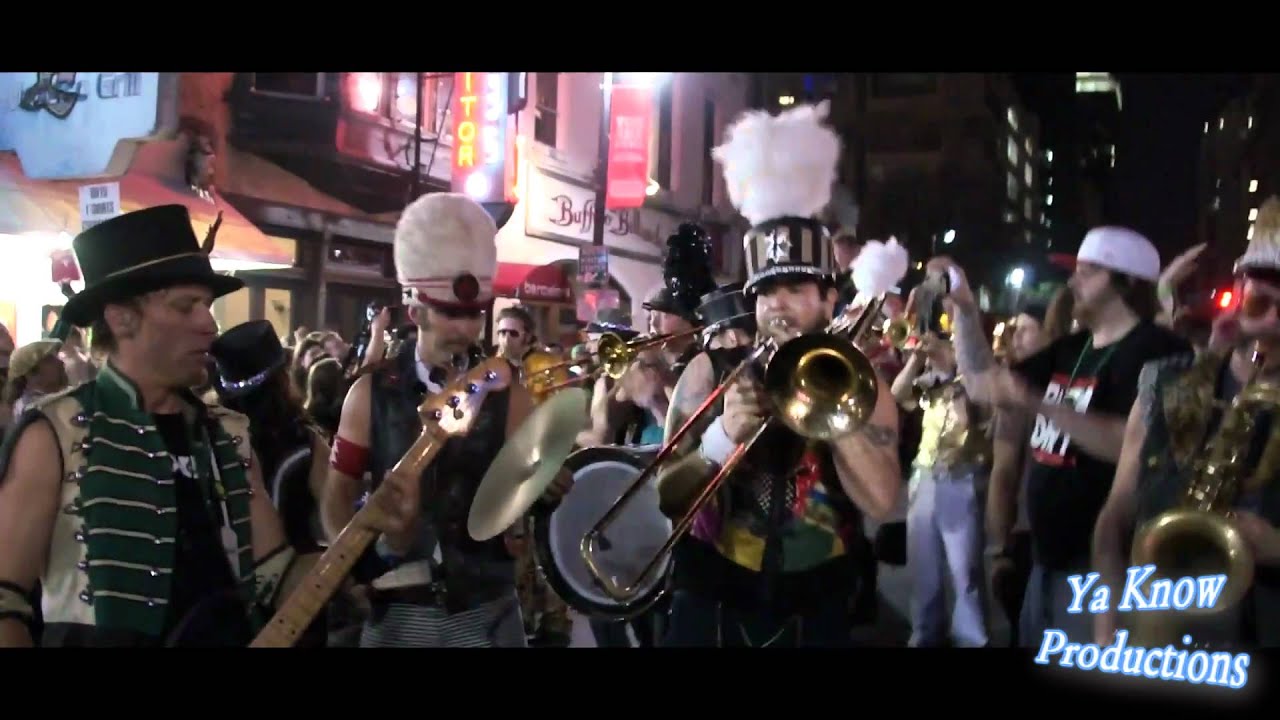 Their name derives from the date of the band's creation, March 4, 2003, which was, that year, Fat Tuesday -- i.e., Mardi Gras. Within two months of their first show, the local press had already coined a new nickname for the act: M4.

But how can you be a marching band, however wild and wacky, with roots to March Fourth, and not call yourself March Forth (in its succession of versions)?

Of course MarchFourth! has a notable horn section -- trombones, trumpets, saxophones -- along with a percussion section, plus electric bass guitar and electric guitar. But wait. That part of the act arrives with their stiltwalkers, acrobats and dancers.

The band members' uniforms are mismatched, and are often redesigned traditional marching band uniforms. They even Macgyver things -- their percussion section's drum harnesses are made from recycled bicycle parts.

March Fourth Marching Band was voted "Best Local Band" back in 2004 by readers of "Willamette Week" alternative weekly newspaper that local bastion of journalism blazed a trail. The August 2007 issue of "Travel + Leisure" magazine featured MarchFourth Marching Band in an article about Portland. Acres of ink followed, especially after MarchFourth! marched around the Portland Arena, performing as the opening act for No Doubt. Singer Gwen Stefani has featured them as the marching band in her solo albums.

They were the marching band featured in an online advertisement for the short-lived Microsoft Kin smartphone.

Their 2011 album, "Magnificent Beast," was produced by music guru Steve Berlin, the saxophone player for Los Lobos. Berlin has produced a catalog of innovative albums for others, including their 2013 single "Shindig," which was also featured in the band's Shindig music video.

In 2013, the song "Gospel," taken from MarchFourth's "Rise Up" album, was featured in the Disney/Pixar film "Monsters University." The song played twice during the film and during the film's closing credits, and was also used in the official trailer for the film.

On September 30, 2016, their album "Magic Number" became the band's first album to be released on the music streaming platform, Spotify.

Though idled by the pandemic, we can expect them to March Forth! with their delightful brand of abnormal when everything else returns to normal. MarchFourth Marching Band / March Forth! is booked by Skyline Music.

And now that you like them, here's a complete, one-hour-plus performance, at:

American Promise is a national organization based in Concord, Massachusetts, that "empowers Americans to act together to win the 28th Amendment so people, not money, govern in America."

$14 billion was spent on federal election races in 2020, the most expensive election in history. Most of that money came from big donors, whose contributions to SuperPACs are -- thanks to a pair of disastrous Supreme Court rulings -- “speech” that can’t be regulated.

The proposed 28th Amendment to the US Constitution would take big money out of politics, making only small donations from individual citizens legal, and making them transparent.

Here are essential details in an example of someone "Marching forth" with that focus:

"Money is not free speech," writes Stefano Sergi in this letter to the editor of Arizona e-newspaper Tucson.com. Stefano continues, "Nothing about money is free. Money is property. Money is power. Money is transactional. Big money political contributions come with strings attached." Stefano, an American Promise volunteer in Arizona, is helping build awareness for the 28th Amendment to ensure everyone has an equal voice in our elections.

☆  On March 13, "American Promise North Texas" presents "A Deep Dive Into Money in Politics." The online event will focus on why we need a constitutional amendment to fix big money’s grip on our political system, and how Texans (and you, wherever you are) can help build support for it. The event begins at 8:30 am Pacific, 10:30 am Central. Register now, at:

We'll bring you features on women musicians as the month unfolds.

We'll still be bringing you the story of the opening of the brand-new, years-in-the-making, MUSEUM OF AFRICAN AMERICAN MUSIC. (Even if we get there late.)

Plus, we still have some special features on blues, banjos, rootsy New Orleans jazz, and other delights to the ears of all -- that owe their origins to the Black experience in America.

Meanwhile, don't be a maskhole, and stay the hell away from the maskless Branch Covidians. No free passes to get stupid!

Resources / Navigation / Contacting us / finding
what you want in current, recent, or archived Guide editions
MOBILE-DEVICE-FRIENDLY
editions load quickly at
www.acousticmusic.net
Or at
www.acousticamericana.blogspot.com
.
On mobile devices, click "view web edition" to bring-up the left side bar with navigation tools. That gives you direct access to click your way to all recent editions. It's easy to bring-up month-by-month archives to everything last year, so far this year, and each previous year.
It's all there, since we first moved The Guide (with its former name) to Blogspot.
Does that mean you need to find Marty and Doc's DeLorean time machine?
Because, geez, THAT was back when Rin-Tin-Tin hadn't gotten his second "tin" from Tin Pan Alley
... and you watched TV on a big box that bombarded you with non-ionizing radiation if you sat close to it, instead of inescapable non-ionizing radiation from 5g
... and you watched movies on reels of film aimed at a screen that bounced-back the light projected onto it, instead of only-ever seeing everything in glowing postage-stamp mode on your phone
... and "the pandemic" meant 1918
... and Rudy Giuliani was "America's Mayor" instead of a babbling portable meltdown of brown ooze
... and "trump" was something that only happened in a card game, instead of being garishly emblazoned on buildings that go bankrupt (before it became a synonym for grifter college, grifter steaks, cultist wackos, deadly violent attempted coups at the Capitol, and banishment from polite society)
... and you can escape now, AND/OR go far enough back, to escape whatever the lunacy du jour and explore what we've published for your perusal and enjoyment.
<^>-<^>-<^>-<^>-<^>-<^>-<^>-<^>-<^>
CONTACT US -- Post Comments / Send Questions / say Howdy at:
Tiedtothetracks (at) Hotmail (dot) com
OR USE THE COMMENTS FUNCTION on the Blogspot site.
<^>-<^>-<^>-<^>-<^>-<^>-<^>-<^>-<^>
Entire contents copyright © 2021,
Lawrence Wines & Tied to the Tracks.
All rights reserved.
<^>-<^>-<^>-<^>-<^>-<^>-<^>-<^>-<^>
.
♪ The ACOUSTIC AMERICANA MUSIC GUIDE endeavors to bring you NEWS – and views of interest to artists everywhere – more specifically to musicians and the creative community and music makers -- and fans of acoustic and Folk-Americana music. That includes both traditional and innovative forms. From the deepest roots to today’s acoustic renaissance, that’s our beat. We provide a wealth of resources, including a HUGE catalog of acoustic-friendly venues (now undergoing a major update), and inside info on FESTIVALS and select performances in Southern California in venues from the monumentally large to the intimately small and cozy. We cover workshops, conferences, and other events for artists and folks in the music industry, and all kinds o’ things in the world of acoustic and Americana and accessible classical music. From washtub bass to musical spoons to oboe to viola to banjo to squeezebox, from Djangostyle to new-fangled-old-time string band music, from sweet Cajun fiddle to bluegrass and pre-bluegrass Appalachian mountain music to all the swamp water roots of the blues and the bright lights of where the music is headed now.
.
The Acoustic Americana Music Guide. Thanks for sittin' a spell. The cyber porch'll be here anytime you come back from a masked safari to fetch your groceries, or get a hankerin' for a virtual version of hittin' the road for the festival circuit or a concert tour.
.
<^>-<^>-<^>-<^>-<^>-<^>-<^>-<^>-<^>
Til we catch ya again on the flip side
in this new world of the now somewhat lessened improbable unknown...
Posted by - Larry, the editor at Thursday, March 04, 2021