.
.
It launched! Here's the photo we took. The hazy atmospherics were not great for tracking it, and the high Sun angle did not allow it to be seen like it would have been, had it gone up back in December as planned. That launch time would have been after 5 pm, when the ground was dark and the over-the-horizon sun would have made the giant rocket gleam like a mirror. Oh, well. You don't usually get to see your tax dollars get spent on spy satellites, anyway. 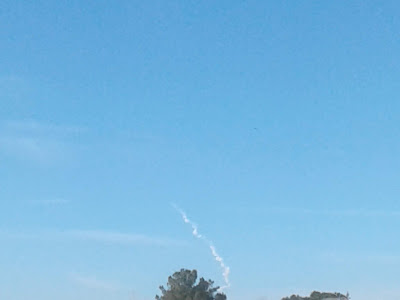 
Here's our story, published before the launch:

Launch from SLC-6 at Vandenberg at is set for 11:05 am PST. The link to watch live online is at the bottom, and the feed goes live at 10:45 am. Feel free to share. This ain't 'zactly something you see everyday.
___

So far, so good, as today's countdown progresses for the many-times-cancelled launch of the supersecret, city-bus-sized spy satellite NROL-71.

Just below, we include four images, three taken this morning, including one from near the top of the 320-foot-tall gantry tower -- vertically taller than the horizontal length of a football field.

The giant launch vehicle, the "Atlas IV Heavy" rocket, weighs 1.6 million pounds. The rocket uses a first-stage of three strapped-together cylinders, each atop its own engines. The appearance may be reminiscent of the Space Shuttle, but there are no solid rocket boosters here -- all three cylinders are liquid-fueled rockets. The engines collectively develop 2.1 million pounds of thrust. They achieve that by burning 465,000 gallons of fuel -- trailing flames from supercold liquid hydrogen ignited by supercold liquid oxygen. Which, all by itself, seems incomprehensibly incongruent. But it's a good thing, creating no toxic gases like solid rocket fueled boosters do.

In Southern California, now that our many-days-long storm has moved east, the launch should be visible across a wide arc of sky.

So, how is it that a supersecret mission gets publicity? Well, because millions will see it, and if they don't know what it is, they'll jam 9-1-1 with reports of an alien invasion or a crashing airliner. If you're sky-watching in L.A., it'll be a minute-and-half or so before the curvature of the Earth lets you see it racing through the sky after the 11:05 am launch. It'll be going from north to south, out to the west -- racing up over a whole lot of ocean towards Antarctica -- to achieve a polar orbit.

The live feed will terminate suddenly because they don't want you to be able to calculate its exact orbital position. But all the math wizards already have, because of all the previously cancelled launch dates and times.

Anyway, you should watch. It's a classified amount of hundreds of millions of your tax dollars whooshing by.

Here's the live launch link to take outside on your phone or tablet: 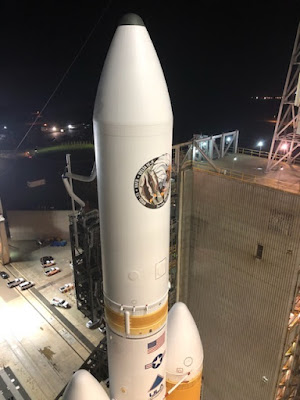 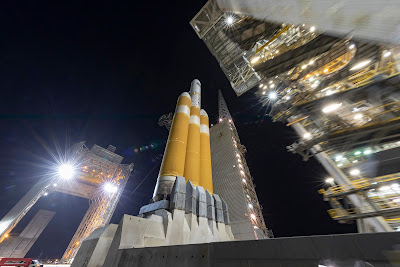 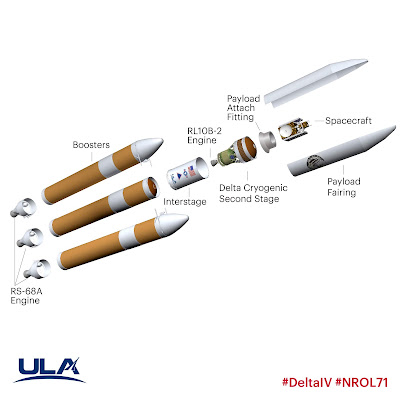 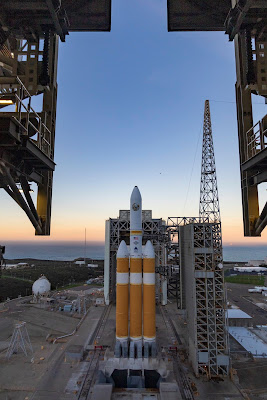 
A fresh "events" edition will be along later today, with all the music and arts events for the weekend and beyond. Meantime, you can go to our earlier edition with the events for this month, and scroll down to get Saturday's and Sunday's events, prior to the updates coming in the new edition. That earlier edition is at:


We'll be back again soon with music news and more "News of the Non-Trumpcentric Universe." (c)


Direct to the Guide's current editions /

OR USE THE COMMENTS FUNCTION on the Blogspot site.

♪ The ACOUSTIC AMERICANA MUSIC GUIDE endeavors to bring you NEWS – and views of interest to artists everywhere – more specifically to musicians and the creative community and music makers and fans of acoustic and Folk-Americana music. That includes both traditional and innovative forms. From the deepest roots to today’s acoustic renaissance, that’s our beat. We provide a wealth of resources, including a HUGE catalog of acoustic-friendly venues (now undergoing a major update), and inside info on FESTIVALS and select performances in Southern California in venues from the monumentally large to the intimately small and cozy. We cover workshops, conferences, and other events for artists and folks in the music industry, and all kinds o’ things in the world of acoustic and Americana and accessible classical music. From washtub bass to musical spoons to oboe to viola to banjo to squeezebox, from Djangostyle to new-fangled-old-time string band music, from sweet Cajun fiddle to bluegrass and pre-bluegrass Appalachian mountain music to all the swamp water roots of the blues and the bright lights of where the music is headed now.

The Acoustic Americana Music Guide. Thanks for sittin' a spell. The cyber porch'll be here anytime you come back from the road.