.
.
This is a special edition with just one feature topic. But never fear:

The latest EVENTS edition, "Wonderment, NAMM, the Concert Scene, Special Screenings, and More," our January 19th edition that lists events into February, is available at:


Watch the Only Total Lunar Eclipse of 2019, Combining a "Blood Moon" & Rare Supermoon 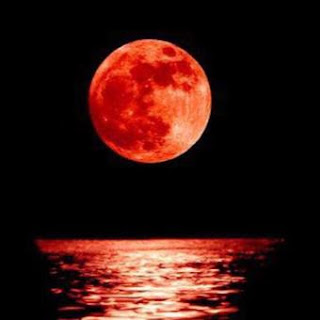 A meteor hit the moon during the lunar eclipse.


Here's a photo. Full report at the National Geographic site: 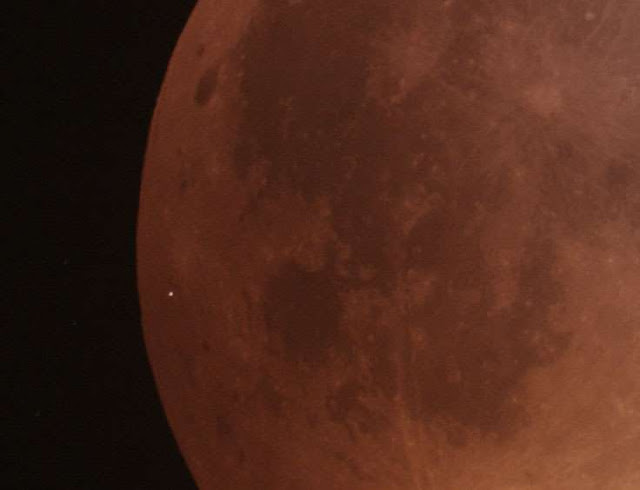 The meteor strike shows as a white dot.

Reports from many parts of the world indicate that many watchers saw it. Photograph copyright Christian Fröschlin, as used by National Geographic.
____

(For those who forgot to go outside, or were on the other side of the planet)

The "Super Blood Wolf Moon" eclipse looked dramatic, and the whitish bit of fringe on one edge enhanced the "Mars-look," mimicking a Martian polar cap.

Funny, thing though -- through binoculars, the reddish tone all but disappeared. But none of the Moon's own features were clear, since it was in full shadow.

In fact, through binoculars, it looked a lot like Jupiter's ice-encrusted oceanic moon Europa. That's the one with more LIQUID water than all the Earth's oceans combined.

Those with access to a good telescope got altogether different artistic impressions.

Ah, the musing of space travel empowered by eclipse-watching. Since we can't really go, after Nixon killed the space program and nobody else ever put it back.

We never got the future we were promised, did we? To quote the June 18, 1798 remark oft misattributed to Thomas Jefferson, but actually made by Congressman Robert Goodloe Harper, "Trillions for defense, but not one cent for tribute!" Of course we changed his "millions" to trillions, since millions don't impress anybody anymore in our age of untaxed gazillionaires. And we can interpret "tribute" to the pursuit of knowledge and the future of humanity, rather than to France, as did Harper. But that's another story.
______________________________

(Here's our original report, published to get you interested before the eclipse happened.)

Unlike the big rocket launch Saturday morning that you probably couldn't see, THIS you can see, big and bold and dramatic. And if you look during the key hour, you'll think Mars suddenly moved very close.

Turn your eyes to the sky the evening of Sunday, January 20th for an especially theatrical total lunar eclipse. Not just "an" eclipse, and not just the last one visible in its entirety from North America for several years to come. This is MUCH more. The pairing of the lunar eclipse and a “supermoon” has some calling this event a "super blood moon." However you refer to it, this eclipse is a great opportunity to observe the Moon at its most unusually magnificent.

In a nice illustrated blog from NASA/JPL, education specialist LYLE TAVERNIER explains how lunar eclipses happen and how they’ve led to both ancient and modern discoveries. Find out when to watch and what to expect on Jan. 20 by reading the Guide's "by the numbers" just below, based on Lyle's expository explanations. Lyle even tells you how can use the eclipse as an opportunity to observe and evaluate properties of the Moon.

By-the-numbers, here's how things will progress through the eclipse, start to finish:

(1) At 6:36 p.m. PST (9:36 p.m. EST) on January 20, the edge of the Moon will begin entering the penumbra -- the partially-dark fringe of the shadow. The Moon will dim very slightly for the next 57 minutes as it moves deeper into the penumbra. Because this part of Earth’s shadow is not fully dark, you may notice only some dim shading (if anything at all) on the Moon near the end of this part of the eclipse.

(5) PSEUDO-MARS: As the Moon moves completely into the umbra, something interesting happens: The Moon begins to turn reddish-orange. The reason for this phenomenon? Earth’s atmosphere. As sunlight passes through it, the small molecules that make up our atmosphere scatter blue light, which is why the sky appears blue. This leaves behind mostly red light that bends, or refracts, into Earth’s shadow. We can see the red light during an eclipse as it falls onto the Moon in Earth’s shadow. This same effect is what gives sunrises and sunsets a reddish-orange color.

(6) A variety of factors affect the appearance of the Moon during a total lunar eclipse. Clouds, dust, ash, photochemical droplets and organic material in the atmosphere can change how much light is refracted into the umbra. Additionally, the January 2019 lunar eclipse takes place when the full moon is at or near the closest point in its orbit to Earth – a time popularly known as a supermoon. This means the Moon is deeper inside the umbra shadow and therefore may appear darker. The potential for variation provides a great opportunity for students to observe and classify the lunar eclipse based on its brightness. Details can be found in the “Teach It” section below.

What if it’s cloudy where you live? Winter eclipses always bring with them the risk of poor viewing conditions. If your view of the Moon is obscured by the weather, explore ONLINE options for watching the eclipse live, such as the Time and Date live stream, at: https://www.timeanddate.com/live

You can read Lyle's full NASA eclipse blog post. He gets into the cultural impacts of eclipses, from ancient Greece and Aristotle to how some modern-day science investigations can only happen during an eclipse. It's a fun exploration, at:


The Guide's latest EVENTS edition, published January 19th, is "Wonderment, NAMM, the Concert Scene, Special Screenings, and More." It contains all you need to know about some superb events into February! It's available at:


MUCH MORE SOON, including
very full
NEWS EDITIONS from NAMM-!

Direct to the Guide's current editions /
MOBILE-DEVICE-FRIENDLY
editions load quickly at
.
www.acousticamericana.blogspot.com
.
< ^>-<^>-<^>-<^>-<^>-<^>-<^>-<^>-<^>
.
CONTACT US -- Post Comments / Send Questions / say Howdy at:
Tiedtothetracks (at) Hotmail (dot) com
.
OR USE THE COMMENTS FUNCTION on the Blogspot site.
.
< ^>-<^>-<^>-<^>-<^>-<^>-<^>-<^>-<^>
Entire contents copyright © 2019,
Lawrence Wines & Tied to the Tracks.
All rights reserved.
< ^>-<^>-<^>-<^>-<^>-<^>-<^>-<^>-<^>
.
♪ The ACOUSTIC AMERICANA MUSIC GUIDE endeavors to bring you NEWS – and views of interest to artists everywhere – more specifically to musicians and the creative community and music makers and fans of acoustic and Folk-Americana music. That includes both traditional and innovative forms. From the deepest roots to today’s acoustic renaissance, that’s our beat. We provide a wealth of resources, including a HUGE catalog of acoustic-friendly venues (now undergoing a major update), and inside info on FESTIVALS and select performances in Southern California in venues from the monumentally large to the intimately small and cozy. We cover workshops, conferences, and other events for artists and folks in the music industry, and all kinds o’ things in the world of acoustic and Americana and accessible classical music. From washtub bass to musical spoons to oboe to viola to banjo to squeezebox, from Djangostyle to new-fangled-old-time string band music, from sweet Cajun fiddle to bluegrass and pre-bluegrass Appalachian mountain music to all the swamp water roots of the blues and the bright lights of where the music is headed now.
.
The Acoustic Americana Music Guide. Thanks for sittin' a spell. The cyber porch'll be here anytime you come back from the road.
.
<^>-<^>-<^>-<^>-<^>-<^>-<^>-<^>-<^>