.
.
UPDATE -- post-live broadcast -- we encourage you to go listen in the archive...

Wow! If you heard it live, you got something that NEVER HAPPENS in today's world of  Wall-Street-driven obfuscation, of sh*t-for-chocolate-ice-cream, of image-over-substance, of crafting a phoney construct to present a false image that has nothing to do with reality.

Because today, you got none of that.

Instead, you got some unvarnished truth. You heard a corporate CEO talking openly and honestly about how his company spent too many years taking the wrong road, playing corporate capitalist games, tarnishing its brand, getting away from its core purpose and alienating its core audience, and nearly going-under -- and how it takes a specific and diligent commitment to regaining trust (with the people it pushed-off the playing field) to bring it back.

JAMES "JC" CURLEIGH, president and CEO of Gibson, could be an instant hero in Washington -- his openness and honest answers would create a revolution there. JC had plenty to say in response to each question from the show's host, and all of it came with forthrightness, no "parsing," no questioning what "is" is, and no hesitation.

"Even the guitar shops were unhappy working with us," he acknowledged, along the way to expressing how Gibson had alienated players, and he says, everybody from stars to music fans.

Let's be clear. It wasn't some confessatory exercise like a 15-year-old getting "personal" on social media with two thousand readers she's never met. JC delivered with the honesty of being an artist matching the skills of an analytical businessman.

"There was ambition beyond execution, and when you have that and you take on hundreds of millions of dollars in debt? The question wasn't 'will you save Gibson,' but how you save it," said JC.

That meant getting-out of, de-emphasizing, divesting from, even abandoning, a lot of the bloated ego stuff that characterizes today's typical corporate mentality and its inscrutable "need" to control all sorts of unrelated enterprises. Yes, he got specific. But in this brief summary, we'll just say that the centerpiece of what he's doing with the company is "Getting back to guitars."

The show, airing as it does on a big "classic rock" format station, spent much of the hour spinning cuts by bands and artists who play Gibson guitars. Electric Gibson guitars.

But hang on. At one point -- and of STRONG INTEREST TO GUIDE READERS -- host STEVE JONES asked him, "As you revitalize Gibson guitars... are you going to do a bunch of stuff with acoustics, too?"

In a voice swelling as much with his own sense of awe as with pride in his brand, JC said, "That Gibson J-45. It's still amazing but the price is up there beyond the reach of a lot of people who want one. We just launched the G-45 for younger people just starting up. There's the Explorers and the SG's and everything that's part of that amazing Gibson sound. We want to get back to putting them in the hands of people who want to play them."

The two also spoke of Epiphone guitars receiving a renewed commitment. Many Americana artists are inseparable from their Epiphones, so this part resonated around here, too. JC spoke of still being able to see, in his mind's eye, a famous photo of the BEATLES finishing their Dodger stadium concert and holding-up their Epiphones in triumph.

That enabled a moment for him to connect the past of the Gibson brand with its future, which he says is "forward-looking," but very aware of its history and legacy.

It was a guitar-lover's love-in, hard against the kind of corporate glasnost the world desperately needs. Good stuff. Compelling stuff.

So, USE THE LINK TO LISTEN IN THE RADIO SHOW'S ARCHIVE. If it's not posted yet, it will be soon, at the bottom of the page at this link. It's:

A "Tune-In" alert: hear the CEO of Gibson LIVE Friday on "JONESY'S JUKEBOX" with host STEVE JONES, TODAY, Feb. 8, 1-2 pm (Pacific) globally on the web and in Southern California on broadcast radio at 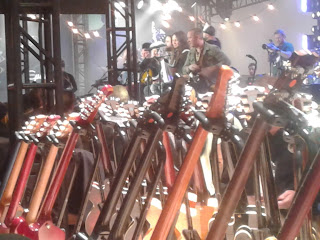 
Top -- Deep in Gibson-land at last month's NAMM. A showcase of endorsed artists is center-stage for a songwriters showcase. In the foreground is a small portion of the forest of guitars rising from the test-drive displays in an adjoining wing, temporarily idled by the stage action.

Bottom -- Performances on stage in the Gibson pavilion and meet-and-greet "signings" with iconic musicians were frequent throughout NAMM, and included Peter Frampton.
___
. 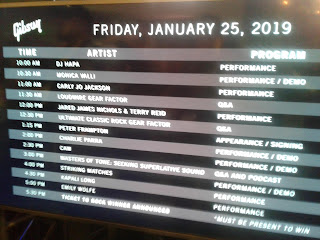 Hot on the heels of his company's major pavilion presence at the massive NAMM Show at the Anaheim Convention Center, James “JC” Curleigh, President and CEO of GIBSON, joins Steve Jones (of the Sex Pistols) for a live, in-depth interview on his “JONESY'S JUKEBOX” show February 8 during the 1 pm (PST) hour.


Worldwide online, catch the show at:

CAN'T MAKE IT for the live show?

After the February 8th airing, listen to the archived interview at the bottom of the show's webpage, at:

GIBSON ignited its next era at NAMM in January.

The pre-eminent American-made instrument brand has revitalized, re-envisioned, and recharged its core mission, paying homage to its storied history -- celebrating the legacies of iconic models like the Les Paul, the SG and the ES-335 -- as it embraces the next vanguard of musicians across generations, genders and genres.

"The new era of GIBSON has begun," says JC. He continues, saying his company is "Writing a new chapter to the guitar of choice for artists in rock, pop, country, blues, folk, jazz, and beyond."

So, will his radio interview today be all fun, or bring substantial news? Tune-in and find out.

Of course, everyone knows giants Gibson and Taylor are top competitors, facing plenty of smaller and formidable boutique instrument makers. But that doesn't mean the big guys are outside the "craftsman" categories -- you don't stay at the top unless you continue to deliver.

Gibson Brands, with all its subsidiaries, has worked hard to reach the size and scope of the world’s most iconic guitar brand. The company has shaped the sounds of generations of musicians and music lovers across genres for more than 100 years. Founded in 1894 and headquartered in Nashville, TN, Gibson Brands has quite a legacy.

The Gibson Brands portfolio includes Gibson, the number-one guitar brand, as well as many of the most beloved and recognizable music brands. These include Epiphone, Kramer, Steinberger, and the Gibson Pro Audio division brands Cerwin Vega, KRK Systems and Stanton.

JC doesn't miss a chance to tell you, "Gibson Brands is dedicated to quality, innovation and sound excellence so that music lovers for generations to come will continue to experience music shaped by Gibson Brands."

Beyond the hyperbole, he should have plenty more to say in this interview.

Meantime, post-NAMM, there are a BUNCH of updated platforms for Gibson info and some new videos:

Back soon with
MUCH more NEWS,
updated EVENTS,
and more in our full series
of POST-NAMM reports.