It's called perseverance, and it's the story of 2020 for all of us, from the inescapably serious to the merely annoying, every day in every way.

Here at The Guide, we are contending with the unworkable format changes and lack of publishing tools imposed on the platform by Google. (Needlessly, ridiculously, destructively imposed by Google.) Until we have time to move The Guide to a new site (after 13 years here), we continue to post a few things, and not as often. We pledge to bring you good stuff wherever we are, or to just go away if we can't.

There is no table of contents for whatever we can include in this edition.

We'll stuff it as full as we can before it refuses to allow us to add more. (Without the platform's former suite of tools and with the large capacity for each edition now gone, we will do what is possible here.)

We have two items from Garrison Keillor

It's the birthday of singer-songwriter John Prine, born in Maywood, Illinois (1946). He got a job working at the post office in his hometown, and he started playing in coffee shops, but no one paid any attention to him. Then one day, the film critic Roget Ebert went to see a movie that he didn't like very much, so he walked out of the theater early and headed down the street to get a beer instead. He happened to go to the bar where Prine was playing as background music. And so instead of writing a movie review that week, Ebert wrote a review called "Singing Mailman Delivers the Message," and suddenly John Prine had a full house every time he played.

... it was on this day in 1935 that Porgy and Bess had its premiere in New York City. George Gershwin wanted to adapt DuBose Heyward's novel Porgy to the stage, and so he went down to South Carolina with his brother Ira, and they spent weeks there trying to learn about African-American Gullah culture.

George Gershwin was so pleased with what he called his "folk opera" that he said, "I think the music is so marvelous, I don't believe I wrote it."

One of its most famous songs is "Summertime," with the lyrics:

(Both those items are copyright Garrison Keillor, from today's edition of his "Writer's Almanac.")

Up next in the Pasadena venue's "Emerging Artist Series" is baritone Justin Birchell. Justin will be joined by pianist and emerging artist mentor Brent McMunn for a program of contemporary stunners.This concert will be LIVESTREAMED tonight (Oct 10) at 8PM on Boston Court’s new UScreen.tv platform. The Emerging Artist Series is free, but registration is required.Can't watch tonight? This concert will be available for one week following the live premiere.

Already registered? Simply click the "watch" button below. The Emerging Artist Series is generously supported by the Lazy L Foundation.

Some News from The Alternate Root

Concert In Your Living Room -

The word from "No Depression"

Signs & Symbols: of and for now 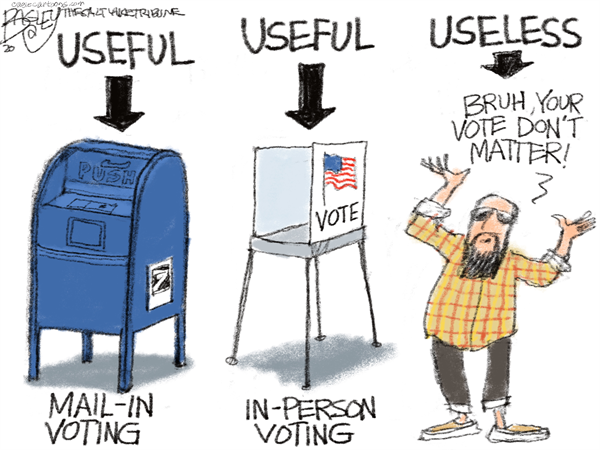 Every day, more happens that is wholly unpredictable, and even more unwelcome. Fact is, the unbelievable has become a numbing normal. News reporting has taken the place of bestsellers on the fiction rack, because nobody can make stuff up that holds a candle to what is being orchestrated by the egomaniacal poster child for abnormal psychology and his lapdog minions.

Most everyone in the country -- and the city, and every other country -- is way beyond wanting the insanity to just stop, and its purveyor to just go away.

We're never sure what day it is -- Orange Imbecile day, Orange Abomination day, or Orange Consciousness day. Or if circumstances will deal us the need to invent another.

The vice presidential candidates' debate could have -- and dammit, should have -- put an end to a good part of this. It didn't, and that was inexcusable. Here's the story our editor filed within hours after that debate:

Til we catch ya again on the flip side
in this new world of the improbable unknown...